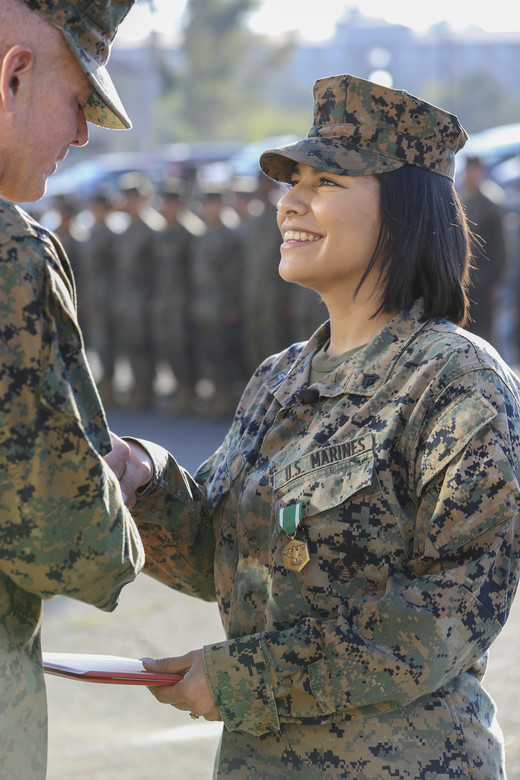 U.S. Marines are known for their fast thinking and courage in a time of need. Marines are taught from day one the core values of honor, courage and commitment. U.S. Marine Cpl. Alexandra Nowak, an administrative specialist with Alpha Company, Headquarters and Support Battalion, Marine Corps Installations West, Marine Corps Base Camp Pendleton, exemplified unwavering courage when she saved the lives of three people Sept. 20.

Nowak was driving to pick up her 2-year old daughter and mother at the airport on Interstate Highway 15 in Escondido, California, when she witnessed a multi-car collision resulting in a sports utility vehicle rolling onto its side.

Nowak, a native of Forney, Texas, sprang into action to help the vehicle’s occupants. She was able to successfully retrieve the driver’s uninjured 9-month old and 4-year old children from the vehicle and help them to safety.

After pulling back the broken windshield, Nowak realized that the driver’s arm was almost completely severed. Nowak then retrieved the tourniquet she kept in her vehicle and proceeded to administer first aid and keep the driver conscious until first responders arrived.

Escondido Fire Department Officials and witnesses at the scene credit Nowak’s quick thinking and bravery as the main reason that the driver did not suffer more severe medical issues or even death.

Those who work with Nowak said her willingness to help was not surprising.

“It’s not surprising that she stopped to help,” said Sgt. Shannon Miranda, an administrative specialist with Alpha Co., H&S Bn., MCI-West, MCB Camp Pendleton. “Her mom skills always kick in and she always tries to help people out.”

Nowak acted as any Marine should act in a traumatic event. With quick thinking and implementing the skills taught to her within the Marine Corps, she became a hero to the three people saved that day and an example to all Marines within the Corps.