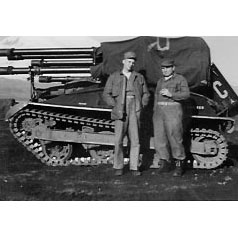 In 1960-61, I was Maintenance Officer for 3rd AT at Camp Schwab, Okinawa. My Maintenance Chief was Gy.Sgt John Vogel. He had been captured on Wake Island in WWII and was a POW. Then came Korea and again he was again captured and was a POW of the Chinese.

I'm not sure if the Marine who wrote you is the same John Vogel, but if he is, I would sure like to contact him. I last saw him when I was transferred back to the "Land of the Big PX."

Here is a photo of us, Lt. Dodd and Gy.Sgt Vogel with one of their Ontos.