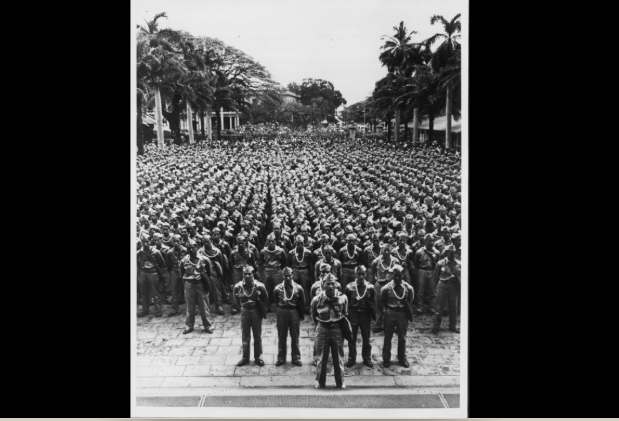 ===The history of Japanese Immigrants ===
The first Japanese immigrants to the U.S. arrived during the 1860s to work on sugarcane plantations in Hawaii. Not only was life on plantation harsh, but Asian immigrants underwent discrimination, humiliation and financial hardship. From 1907 to 1924, informal and formal measures were taken to limit the lifestyles of immigrants, creating a segregated society.

After years of plantation work, some moved to the continental U.S., while others stayed in Hawaii and opened independent businesses.

On Dec. 7, 1941, Japan attacked Pearl Harbor. This led to the issuing of Executive Order 9066 on Feb. 19, 1942. This policy stated that everyone with Japanese ancestry living in the U.S. must be detained at internment camps for security reasons. This meant that families were forced to leave their homes and were separated, children were forced to leave school, businesses had to be closed, and civil rights were taken away. It is said that more than 110,000 Japanese-Americans were incarcerated throughout 10 internment camps in the U.S.

===Japanese-American service members===
The Battle of Pearl Harbor changed everything.

More than 1,400 second-generation Americans of Japanese descent, or nisei, were serving in the Hawaii Territorial Guard before World War II. After the attack, they were stripped of their rifles and transferred to Camp McCoy, Wisconsin, due to concerns that they might cause a security threat. However, they were also trained to be a provisional infantry unit for possible deployment to European theater – later becoming the 100th Infantry Battalion. Their motto was “Remember Pearl Harbor.”

Right after the attack, all Reserve Officer’s Training Corps students from the University of Hawai’i reported to HTG and were assigned military duties such as guarding vital installations and helping with the Red Cross. After a month of service, nisei soldiers were dismissed from duty for being classified as 4C, enemy aliens, meaning they could not serve in the armed forces.

The disheartened nisei ROTC students wrote a petition to the military governor, Army Lt. Gen. Delos Emmons, to allow them to serve their country and to prove their loyalty to the U.S. With Emmons’ approval, a labor battalion, the Victory Varsity Volunteer, was established. Through their hard labor, they regained the trust of the U.S. military. Because the 100th Infantry Battalion soldiers were breaking records in Camp McCoy, the image of Japanese-Americans was enhanced, leading to the establishment of 442nd Regimental Combat Team.

Despite a lack of enthusiasm from Japanese-Americans in mainland U.S., there were around 10,000 nisei volunteers from Hawaii who signed up for 1,500 available slots. Their motto was “Go For Broke” – risking it all to win big; win against the German in Europe and win against the racial prejudice in the U.S.

The 100th Infantry Battalion/442nd Regimental Combat Team made up of nisei soldiers fought in the European theater. They are commonly regarded as the most decorated unit in the U.S. military history, having earned more than 18,000 individual decorations to include 21 Congressional Medals of Honor, 52 distinguished service Crosses, 560 Silver Stars, and 4,000 Bronze Stars.

Meanwhile, there was another military unit with nisei soldiers. Due to the secrecy, they did not receive as much recognition as the 100th and the 442nd. They were members of Military Intelligence Service. The nisei soldiers with the MIS were trained to be interpreters and interrogators. They played a vital role in the Pacific theater – especially in the Battle of Okinawa, during which they persuaded Japanese Imperial soldiers and civilians hiding in caves to come out and surrender.

“[The MIS] saved over 1 million lives and shortened the war by two years,” said Army Maj. Gen. Charles Willoughby, intelligence chief for Gen. Douglas MacArthur who was the Supreme Commander for the Allied Powers during the occupation of Japan.

===Voice of Battle of Okinawa survivor saved by nisei soldier===
Tsuruko Yara, 91 year old from Kitanakagusuku Village, Okinawa, was saved by Taro Higa, a nisei soldiers from Hawaii who was in Okinawa during the battle as an interpreter. She was 16 years old when the war started – hiding during the day and fleeing during the night; avoiding the crossfire of the battle.

“When my mother, sister and I were found and captured by American forces, I was so terrified, I was wailing,” said Yara. “That was the first time I saw Americans. Soon after, a soldier named Higa came to calm us down. After talking with Higa, we were so relieved and happy that we didn’t have to run anymore. We were taken to Camp Koza where we were fed C-rations. They were so good! Looking back, I feel so lucky that Higa was there.”

Two to three decades later, Yara heard that Higa was looking for her and her family. Since then, they had numerous exchanges here in Okinawa and over in Hawaii. Whenever there is a chance, Yara shares her story to her grandchildren.

===Marines of Japanese descent===
Lt. Col. Peter Makoto Gibbons, executive officer for Marine Aircraft Group 36, 1st Marine Aircraft Wing, was born in Japan between an American father and a Japanese mother. His mother was a child living near Tokyo during World War II.

Gibbons recalls a moment when he and his mother were watching a documentary on the Battle of Iwo Jima. His mother was taken aback seeing a Marine giving water to a detainee, as if it was contradicting propaganda images she saw growing up.

“I am not sure what was going through her head, but it made me realize that race and ethnicity shouldn’t matter; we need to treat everyone with dignity and respect,” finished Gibbons.

“Learning the history of Japanese immigrants, self-sacrifice and the hardship they went through makes me very proud of my heritage as a nisei Japanese descent,” said Ishimaru. “I make sure to keep my heritage alive through constantly learning about the multiple sides of the history.”

Ishimaru’s paternal grandfather worked for the Department of Defense as a psychiatrist at Camp Zama, Japan, during the Vietnam War. He treated service members returning from Vietnam suffering from post-traumatic stress disorder. However, decades before that, his maternal grandfather was making ammunition in a factory for the war effort while a high school student in Japan. Through collecting theses oral histories from both sides of the family, he realized that there are always going to be multiple sides to everything.

“There are always different perspectives on everything that happens in life,” said Ishimaru. “And that keeping an open mind is the key to understanding someone or something. Both the U.S. and Japan suffered and fought for the ones they loved and wanted to protect them. In the end, we are now on the same team and have a mutual understanding of each other to take on whatever comes at us as allies.”

Special thanks to Stacey Hayashi for her assistance for historical references. Hayashi, a fourth generation Japanese-American and director of the film “Go For Broke: An Origin Story.”

“It is important to preserve and educate the younger generations with the stories of these legacy warriors who have paved the way for Japanese-Americans,” said Hayashi.