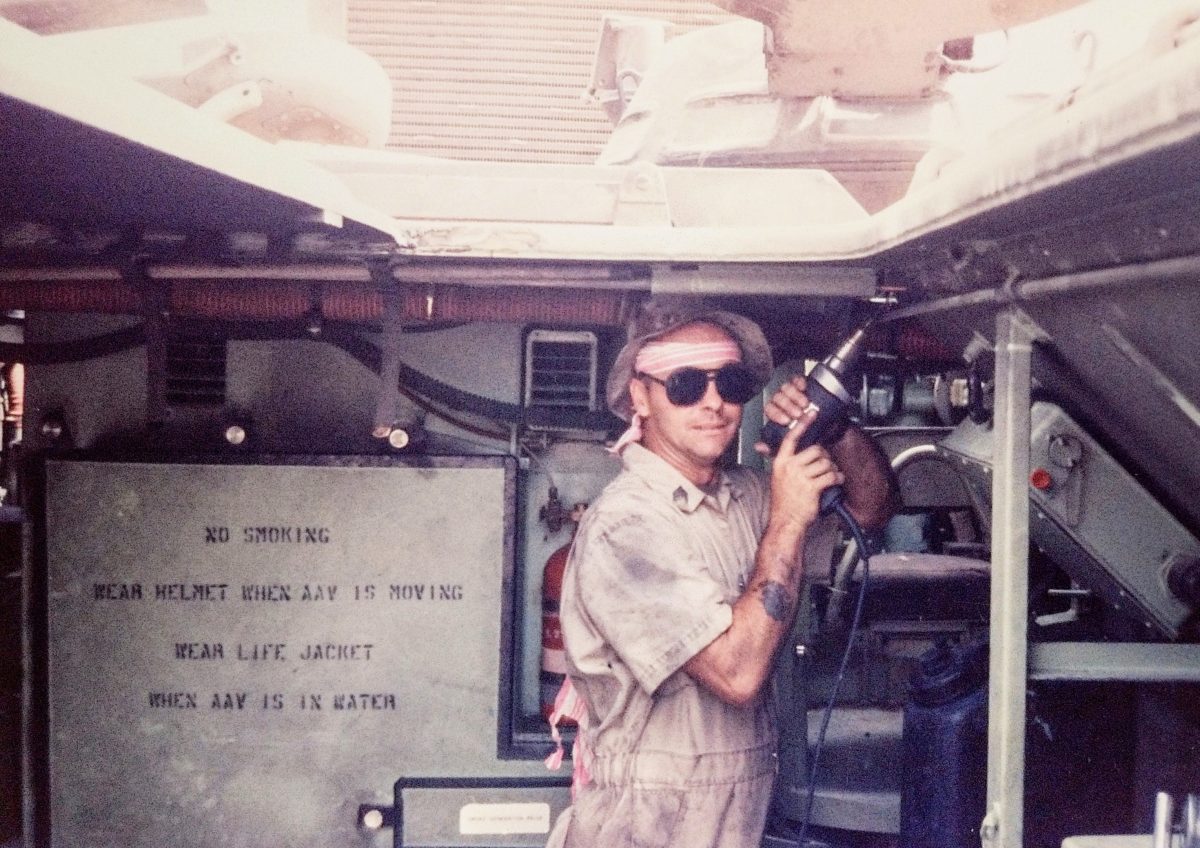 “I’ve loved it; I’ve absolutely loved it,” said Pittman, a logistician who retired in December after working in the Advanced Amphibious Assault program office at Program Executive Officer Land Systems for the past 30 years. “It’s the only thing I’ve done since I was 18 years old.”

“I wanted to defend my country, have some discipline, and get out and experience the world,” recalled Pittman.

He was an amphibious assault vehicle—colloquially referred to as “amtrack”—operator, a Marine responsible for ferrying his fellow Marines and their cargo into harm’s way, from ship to shore. He stayed in uniform for more than 23 years, serving during the Vietnam and Cold War conflicts before retiring as a master sergeant in 1995.

Pittman’s experience as an amtracker proved to be an invaluable asset to his future role as a logistician at PM AAA. Throughout the years, he has seen the Corps’ evolution of amphibious assault vehicles firsthand—from his first vehicle, the Landing Vehicle Tracked P5, to the current vehicle, the Assault Amphibious Vehicle.

Upon joining the program office, Pittman also saw—and helped shape—the future of the Corps’ amphibious combat through his work on the Expeditionary Fighting Vehicle and the Amphibious Combat Vehicle programs.

“TJ is absolutely the epitome of an unsung hero,” said Col. Kirk Mullins, program manager at PM AAA. “A retired Marine amtracker who never forgot his amphibious roots, TJ’s passion and commitment to Marines are palpable.”

This sentiment was shared among colleagues in and outside of the program office.

“His experience and knowledge has been invaluable,” said Lou Hearrell, a logistician and retired master gunnery sergeant who worked with Pittman at PM AAA on both the EFV and ACV programs for more than 15 years. “I can’t say enough kudos for TJ. It’s hard to put together after all those years exactly everything; he’s highly dedicated, he’s motivated and he doesn’t give up.”

Pittman’s tenacity and ability to solve problems on-the-fly were hallmarks of his work as a logistician at PM AAA. When the EFV program was cancelled in 2011, he was responsible for planning for the collection and dismantling of the vehicles, which at the time were scattered across the United States—from Hawaii to Charleston, South Carolina.

“We were able to account for every piece and part,” said Hearrell, who worked alongside Pittman and others on that effort. “There were 198,000 pieces, and all of them were in the records and signed for.”

With his extensive experience using and working with amtracks, Pittman contributed to not only building a better vehicle, but also to creating a better user experience for amtrack operators and maintainers, specifically through the use of interactive electronic technical manuals for the vehicles.

“When I was in uniform, we didn’t have any electronic tech manuals. It was all paper,” explained Pittman. “We carried ‘mount out’ boxes, which were about 4-feet long, 2-feet wide and 1-and-a-half feet deep, carrying all paper manuals for both operators and mechanics. Now, you just need to carry a laptop, which saves a lot of space.”

In the months prior to his retirement, Pittman’s primary focus had been planning and running the ACV’s successful logistics demonstration effort, which ended this past November. The logistics demonstration effort was one of the last steps PM AAA needed to execute before training fleet Marines to use and maintain the ACV during Initial Operational Test and Evaluation activities scheduled for 2020.

“I think what was most impressive about TJ’s performance was not only managing the whole logistics demonstration from cradle to grave, but also his ability to bring together Marines, civilians, contractors and everyone else involved in order to execute the event,” said Maj. Justin Davis, deputy director at the Amphibious Vehicle Test Branch in Camp Pendleton, California, where the logistics demonstration occurred. “It takes a lot of initiative and leadership skills to manage such a diverse—professionally and globally—workforce at such a large scale.”

During this effort, Pittman also ensured that the ACV’s operator and maintenance technical manuals were ready for the fleet.

“Validation of the thousands of pages [in the technical manuals] ultimately pays dividends down the road when you field equipment to the Marines,” said Davis. “He alleviated a lot of the ‘discovery learning’ from Marines when they get the vehicle, which I think is huge.”

Additionally, Pittman’s leadership skills and dedication to his work left a lasting impression on others around him.

“TJ is one of those folks who can leave an everlasting impression on your soul,” said PM AAA logistician and longtime colleague Ralph Brubaker. “He’s a unique individual with a huge heart who’s willing to go out of his way to help. He’s a person anyone would want to have as a neighbor, a friend or a colleague.”

Another longtime PM AAA colleague and retired amtracker, Joel Ashinhurst, suggested, “I think TJ definitely feels a responsibility to leave the current Marines with a more capable vehicle than he crewed during his years in uniform. I admire him for his willingness to stay on as long as he has, and his loyalty to not just the Marine Corps, but also to those young Marines who will crew the next amphibious vehicle, the ACV.”

Reflecting on his 48-year career and retirement, Pittman said, “I’ve loved every minute of it.” He admitted that he’ll miss the people, the job and the busyness of the office, at least initially. He plans to enjoy life with his wife of 46 years and to spend more time with his sons and grandchildren. He and his wife plan on sightseeing across the United States with their two Pomeranians and “seeing some of the world that we’ve been guarding.”

One thing is for certain, though: the impact he has had on the program, and the impact he’ll have on the lives of Marines, will last for generations to come.