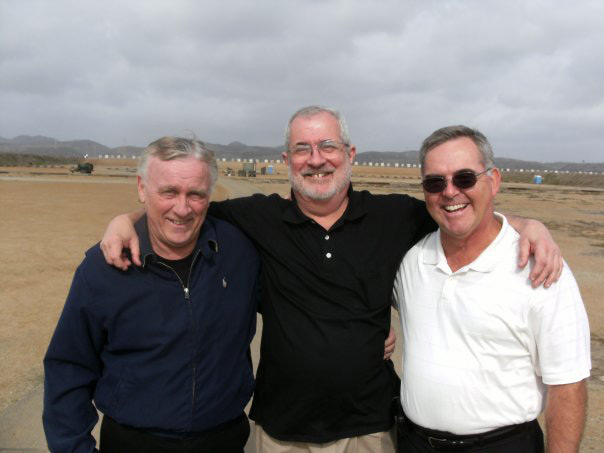 On 27 October 2009 (coming up on a year now), two of my Marine Corps brothers and I had a great reunion at MCRD. Inseparable during boot camp and ITR, we’d lost touch over the years, and “found” each other through the internet. We promptly decided a reunion was in order, and that the only place to have it was at MCRD where we met, and the only time to have it was from 26-28 October, since 27 October was to be the 40th anniversary of our first day of boot camp, to the day.

Chuck Roots, Larry McEntire, and I approached the main gate bright and early the morning of 26 October. Chuck is a retired O-6, and we were in his car, so getting on the base was no problem. We immediately went to the Chaplain’s office. Some explanation is probably in order here. Chuck had risen to SSGT in the Corps, and gotten out to return to college, where he felt the call to the ministry, and got his Divinity degree. As a young pastor, he was approached by a Naval recruiter who asked him if he was interested in being a Chaplain. Chuck said he was, but only if he could minister to Marines (as you know, the Marine Corps doesn’t have Chaplains, and the Navy provides them, as it does Corpsmen). He was assured that he could, and just like that, he became a Naval officer, and participated in every military action from Vietnam through Operation Iraqi Freedom, and retired as Command Chaplain for the 4th Marine Air Wing.

So back to my story: The Chaplain was glad to give us our own escort from his office, who took us all over the Depot. We wandered among the few remaining Quonset huts, all over the grinder, got a few pictures on the yellow footprints, and even got to go inside our old squad bay where we were quartered after moving out of the Quonset huts. Our escort’s cell phone rang, and after a brief conversation, he told us that we were to report to the Battalion CO’s office immediately. He didn’t say why, and we didn’t ask. An order’s an order, even 40 years later! Turns out the CO, a Lt. Col., had heard from the Chaplain that we were aboard, and wanted to meet these three “old relics” who used to be part of his command. He introduced us to the curator of the Marine Corps museum, who invited us to a breakfast that next day (27 October) with the Marine Corps Historical Society at one of the mess halls. We were only too glad to accept! At breakfast, we met and spoke briefly with BGen Ron Bailey, the base commander, who made it a point during his speech to recognize us for making this “pilgrimage” in order to be here on the exact 40th anniversary of the day we started our journey towards becoming Marines. We were flabbergasted that anyone would consider that any big deal! We had never even considered doing it anywhere else or at any other time. After breakfast, we were invited to a private tour of the new museum, and eagerly accepted. At that point, the real highlight of our trip occurred. One of the Historical Society members was himself an Iwo Jima survivor, and as you can imagine, most highly revered. This fine gentleman walked up (ramrod straight, despite his years) and actually asked us if we’d mind him joining us on the tour. Mind? Are you kidding me? We literally swallowed lumps in our throats as we said “Sir, you have no idea what an honor we would consider that to be”. It was too. We had a great tour, and he told us some truly outstanding stories, about Iwo Jima, and his career as a Marine, including tours of duty as a Drill Instructor. None of us will ever forget it.

We finished our reunion with a trip to Camp Pendleton and Edson Range, where we’d qualified with our M-14’s so long ago. What a trip it had been. Every Marine we met went out of his or her way to make us feel welcome and to try and make our visit more enjoyable. As for the three of us, after 40 years, it was as though we’d never been apart, not a moment of awkwardness. We even resumed some arguments started back in 1969 (and still unsettled, of course, stubborn jarheads!). We’re going to try and do it again next year, and this time, get as many of our old Platoon 2193 to join us as we can. I hope anyone who hasn’t been to a reunion like this will give it some thought. I guarantee they’ll enjoy it!

Several pictures on my Facebook page, by the way, and I’ve attached a few here. Feel free to drop in and take a look, if you’re of a mind to. Thanks for reading!