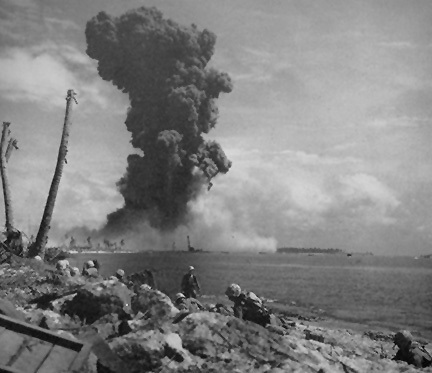 Many times things didn’t go as planned during Invasions of the Islands in the South Pacific for the Marines. One such incident was at Roi Namur in the Kwajalein Island group. Roi Namur was the target of the 4th Marine Division in the Battle for Kwajalein. There isn’t many references to this so you’ll just have to rely on the memory of an Old Marine who got the story from one of the Marines who landed on Roi Namur, later information of this was given reference to in articles and stories of the Invasion.

Roi and Namur are two separate islands, Roi to the West and Namur to the East. The islands are connected by a causeway on a narrow strip of land with the total land mass of only about a square mile. Namur, if memory serves, had a building that had been hit hard by Naval Gunfire. The building which was a strong concrete structure, after the Naval gun fire there was just a large concrete foundation like a blown up building leaving ample spaces for Snipers, etc. Marines had fairly well cleaned up Roi of the enemy soldiers and crossed the causeway intending to eliminate any snipers in the building.

There was a terrible explosion, an airplane flying over the area at the time was tossed high in the air and damaged to where the pilot had to limp back to the carrier and land his plane. Blocks of concrete were thrown way out to sea, I don’t know if any landed on ships or not.