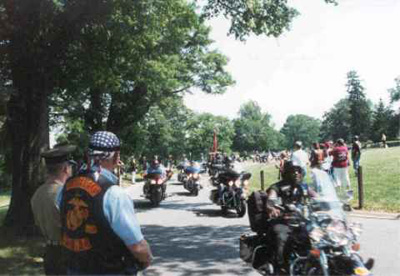 As you all know, Darlene and I have just returned from the Memorial Day Ceremony known as Rolling Thunder. This gathering of military veterans and their families takes place annually in Washington D.C. It is a very large and meaningful grouping which involves hundreds of thousands of veteran motorcyclists from all over the world. It is almost a holy pilgrimage for most of the people attending and it attracts people from all over the country and even many foreign military veterans. The ending of this pilgrimage takes place at the Lincoln Memorial and the Korean and Vietnam Walls. Wreaths are placed at all the memorials with a large all day ceremony taking place at the Lincoln Memorial.

This is the first of a series I will be sending out beginning with the arrival of the group called Run For The Wall. They and many of the other riders from all over the country meet here to begin the ceremonies and then ride over to the Tomb of the Unknown Soldier for a wreathe laying. Following that ceremony, the groups break up to their hotels and motels to prepare for the Rolling Thunder Parade which begins at noon the next day. This group of pictures is representative of the arrival and gathering at the Iwo Jima Memorial.