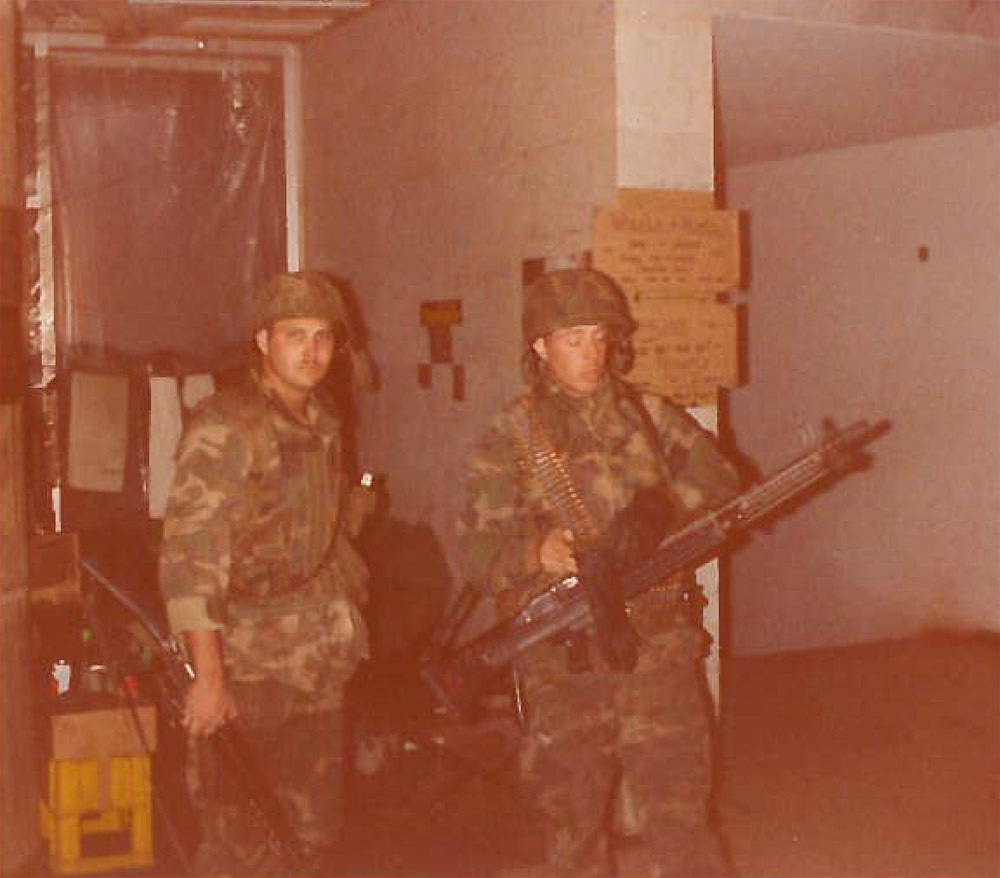 Attached are four pictures from my first tour in Beirut in 1983. The top left photo is a pic of me and my best buddy Tim Wheeler from Portsmouth Ohio. We are getting ready to go out on patrol. Tim is on the right of the photo with the M60. The photo was taken on the second floor of what I call the American University, but not sure if that is correct as another Marine a few years ago who is also a Root Vet had another name for the structure when he replied to a previous post to Sgt. Grit.

Hopefully that Marine reads this post and can shed some light on it, but anywho, we referred to it as the American University as best as I can recall. My question is, is there anyone out there on the Sgt. Grit site from either 1/8 or 2/8 (we were 3/8) who occupied the space next the ladder-well in the photo behind Tim and I? We hung out in this corner and held nightly card games. We hung a First Blood poster on the column to my right in the photo and we left it for the unit who replaced us in the building. Also, being from Baltimore the bar Hamerjacks was a huge deal back then and I was the one who plastered the Hammerjacks sticker on the bulkhead behind Tim. The sticker is visible in the photo right in between my head and Tim’s head. If anyone recognizes these photos, please have them contact me.

The windows behind us were all blown out and there was a 4′ high sandbag bulkhead separating the hooch area from the outside deck, but the area was a popular hangout for all of Weapons Platoon. The second photo is one of the building from the outside. The middle photo is of me on radio watch on one of the out-post which was about 300 yards from the main compound. You can see the main building over my right shoulder. Funny story about this photo – every so often a few small Lebanese boys would come by asking to make a food or Pepsi run for us. I believe the going rate back then for a case of Pepsi was $20.00 and they were not even the full size cans, but we wanted the Pepsi so we paid the price. We would give them money to buy the stuff for us and then give them the change as a tip. Some of them ran with our money but most of them were pretty honest and always came back. Not the smartest thing to do I know, but I think we just got complacent with some of the locals. Anyway, one day the two boys came by and by this time we had known them for about a month and we would let them in the building and they came up on the top deck to talk to us. It was about six of us manning the post and I was on radio watch that morning. One of the boys asked to hold the handset and I stupidly let him hold it. They spoke fairly good English and I told him not to key the handset, but he did anyway and spoke in Lebanese. Almost immediately someone broke in and asked who was speaking and to identify and so I grabbed the handset and replied. On the roof of the main compound were forward observers and snipers who could easily see our position, so when I got back from post later that day I got my azs reamed out by my Platoon Commander and our two Staff Sergeants, but all three were good guys and after lighting me up a bit they laughed it off. The bottom picture is of the Beirut International Airport and was taken from the “Sh-t” River, where we were positioned when we first landed on shore. If any Root Vets recognize any of these pictures, feel free to contact me! Semper Fi.

One thought on “Root Vets”