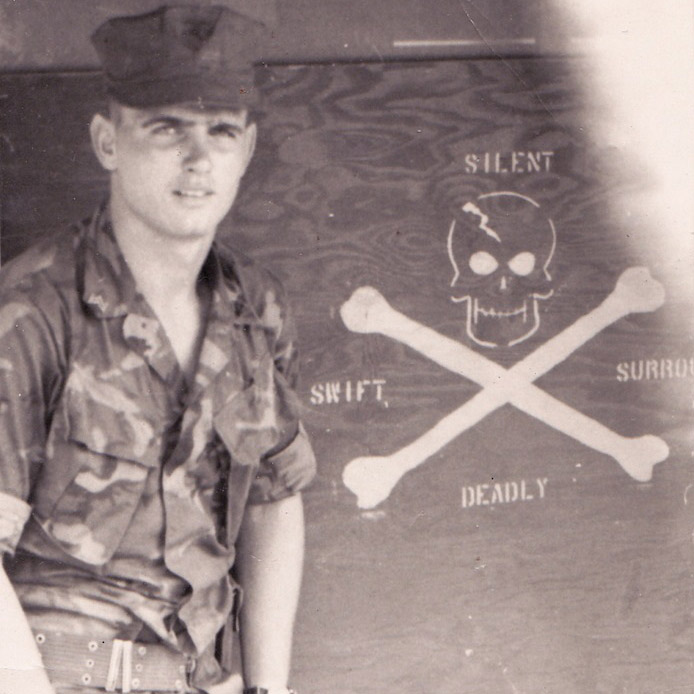 During my Tour in Vietnam there were many things that we modified to help us with our missions. I wish I could remember this Marines name, he was with Alpha Company 1st Recon. Top Barker ran “A” Co. and the sign painted was one of his works of Art. 1st Recon’s motto was “Swift, Silent, Deadly”, Top Barker added Surrounded to the motto as you can see.

One of the things we found handy was the Pilots Emergency Kit and as any Good Marine is handy at scrounging, we scrounged these Pilots Emergency Kits and used the wrist compasses as you can see on this Marines wrist alongside his watch. There were a lot of other things in the Pilots Emergency Kit, Food, Vitamins and other useful items, but they also caused some problems because some Marines came home addicted to Amphetamines. But patrolling around boulders as big as cars and houses, you had to keep alert.

The Camos he is wearing were just being issued, the Korean Camos were neat as were the Korean dry rat’s, some of their spicy ones were better than Mexican food. Open it, pour some water in it, close it and put it inside your utilities next to the skivvy shirt. Eat at the next break.

Ah Well those were the days.

10 thoughts on “Scrounging In Vietnam”