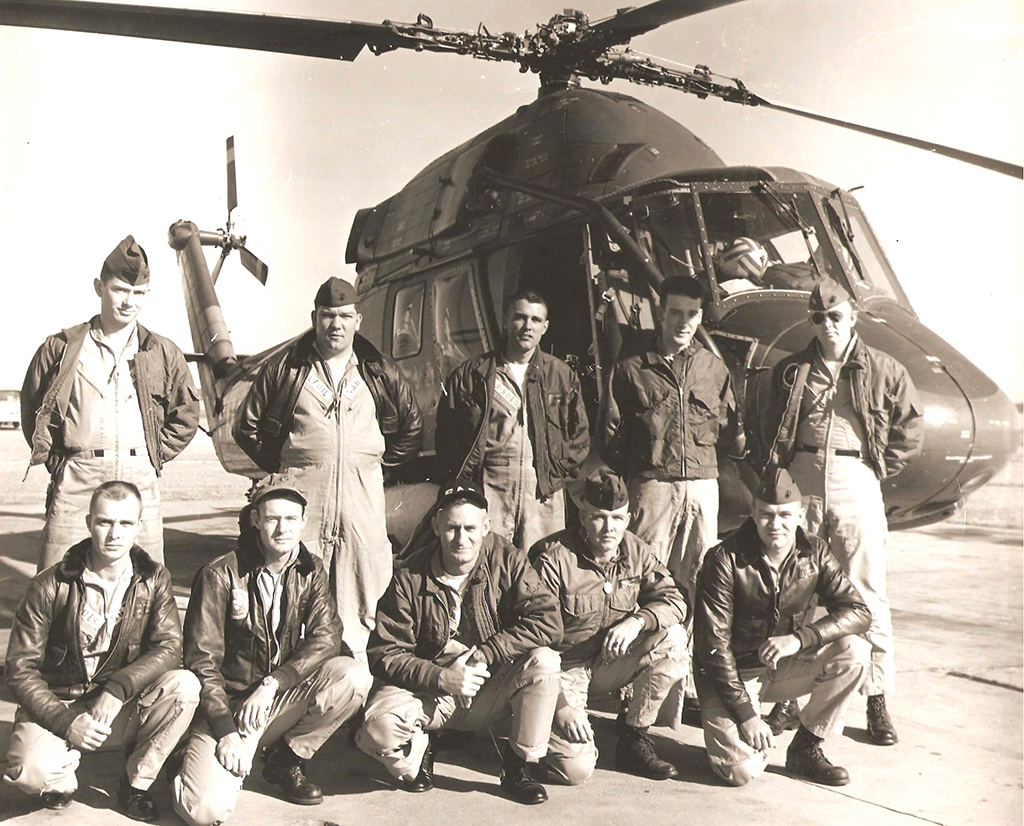 Here are two photos that are essentially 50 years apart. The more recent photo (color) was taken in July 2015 at MCAS Cherry Point. The two civilians in the photo are former Sgt. Kurt Helm (on the left) and former Cpl. Ed Barewich (on the right) standing with the crew of Cherry Point’s Search and Rescue unit. The black and white photo comprises then PFC Kurt Helm standing in the back row on the left, and then PFC Ed Barewich standing in the back row, middle, with Cherry Point’s Search and Rescue unit in December 1965.

Lt.Col. Marty Bedell, the current C.O. of Search and Rescue (standing in the back row between Kurt and me) and his men could not be a finer group of Marines. They went out of their way to make us feel welcome. As you might imagine, much of our conversation dealt with the changes in the SAR operation over the years; and there were many. As an example, today’s SAR unit flies the CH-46E, where as in the sixties we flew the UH-2B. But the basic functions and procedures varied very little. No question though, today’s SAR crew are better trained and have more resources available to them, than available in the sixties.

When first learned that the SAR function at Cherry Point was to be shut down, I contacted Kurt and with a very small window of opportunity, we made arrangements to visit the current SAR unit to say farewell to the last crew of Pedro. Pedro is the radio call sign for the search and rescue helicopter. Search and Rescue at MCAS Cherry Point was established in 1957. After 58 years of supporting the air operations for the headquarters of the Second Marine Air Wing, Pentagon budget cuts will find the SAR function, shutting down by the end of September. Over the years, Pedro has become somewhat of a celebrity within the surrounding communities, due in large part to the many life saving and disaster relief missions flown by the SAR unit, much as we did 50 years ago.

The SAR billet is very small in comparison to other Marine Corps operating units. For example, there were only eleven of us in SAR back in the mid-sixties, compared to thirty or so in today’s SAR unit. Most Marine Corps air stations had an SAR function and Cherry Point’s may very likely be the last. Nonetheless, it is gratifying to see that the legacy was brought forward with the same level of dedication, motivation and that crucial, can-do attitude.

To current and former Marine Corps air station search and rescue helicopter crews, I extend to you all, a Well Done!

4 thoughts on “Search and Rescue Legacy”