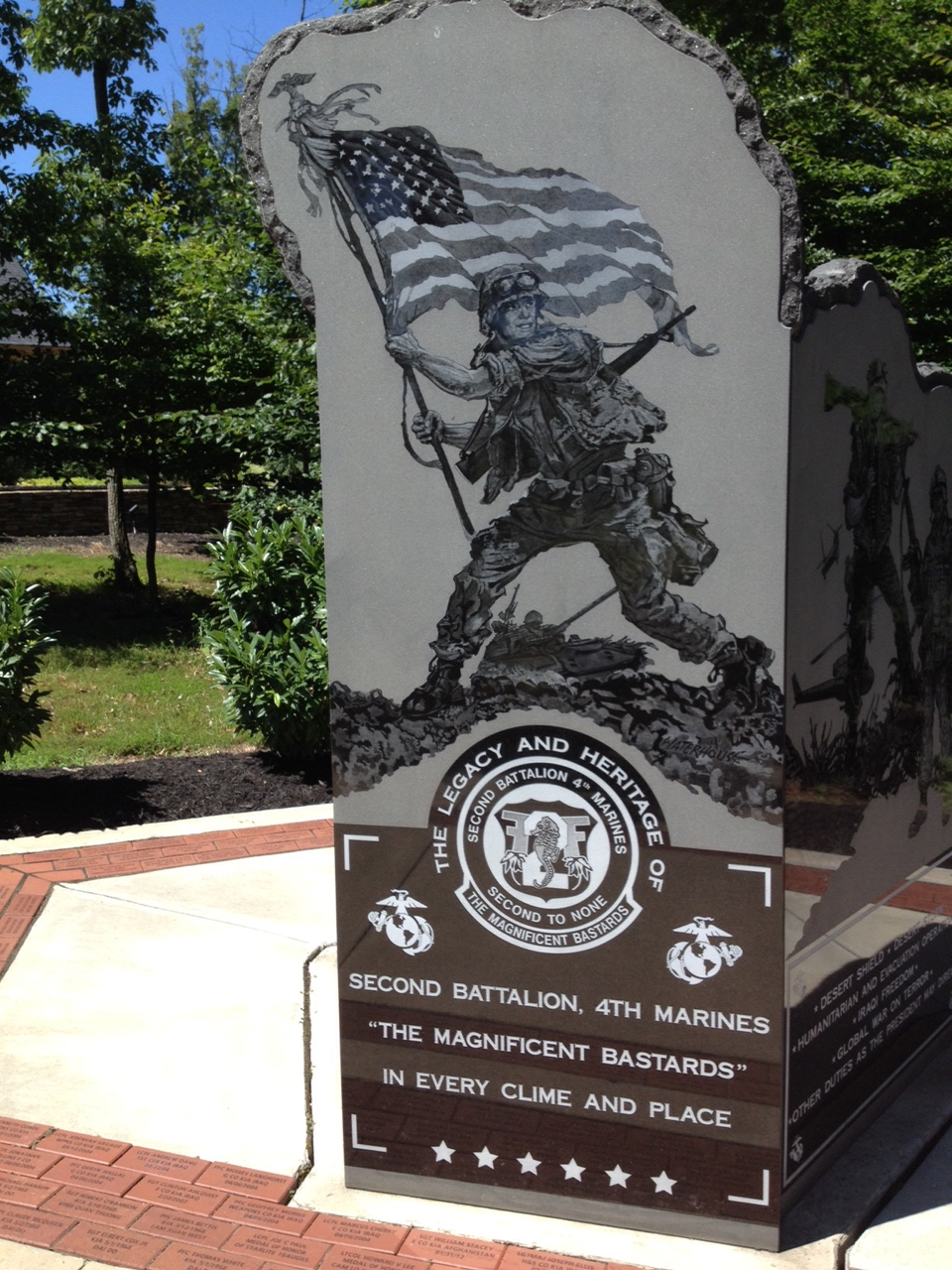 July 22-26 I had the honor along with two Marine buddies, from Hotel 2/4 the “Magnificent Bastards” (We reunited a few years back), to attend the Battalion Re-Union in Quantico Virginia. Our spouses wanted to attend. We were somewhat reluctant since this was our first re-union not knowing what to expect. After contacting a board member via e-mail with two follow up e-mails by board members we were welcomed and advised looking forward to meeting us. Wives, family members & guests were invited.

Attached is a picture of the 2/4 Memorial located in “Semper Fidelis” Park. A trail with bricks engraved with names and units, and various memorials are displayed throughout the park located next to the Marine Corps Museum. Nearby is the Marine Corps Quantico Base & Basic School.

At the initial evening reception we were informed there were two hundred plus signed up including, spouses, family members & friends.

Our scheduled itinerary was to meet & greet the first evening. The second day was to depart for the chapel located at the top of the hill to the park trail located adjacent to the Marine Corps Museum & nearby the Quantico Marine Corps Base & Basic School.

Brick dedication located at the nase of the 2/4 Memorial honoring the three Gold Star families in attendance.

We then departed for the Basic School for lunch. Then a briefing of today’s training for future Officers. Ending with a demo of the required “Martial Arts ” training.

The following day was stuffed with highlights. At the Vietnam Memorial all Vietnam Veterans received a commemorative 50 Year Anniversary of the Vietnam War pin in a special ceremony. Following the ceremony I was able to direct my Marine Buddies, now numbered five members from our Company included our Platoon Sargent to panel 17E.

I scrolled thru the nine Men’s names, our buddies from First Platoon who on March 30 ’67 paid the ultimate sacrifice. Upon Departure we said a silent prayer than to the Iwo Jima Memorial. A short break then to dinner at the Reagan Building, With now renewed acquaintances and new found friends. We awaited the ” highlight” of the evening. The “8th & I ” Parade by the Marine Corps Barracks Band & Drill team. Needless to say this was “Awesome & Outstanding.”

The fourth day of touring the Museum lunch in the “Tun Tavern” & the finale at The Marine Corps Museum, “The Banquet Dinner,” speakers & recognition & new found friends, buddies. Reuniting & saying our farewells.

I encourage any former or Active members to join the 2/4 Association or units you served with. I encourage you to visit the Marine Corps Museum in Triangle ( Quantico VA Or Attend the 8th& I Parade I am personally proud to have served with the Marines as a Navy Combat Corpsman and attend in support my buddies, at our “Magnificent Bastard reunion.”