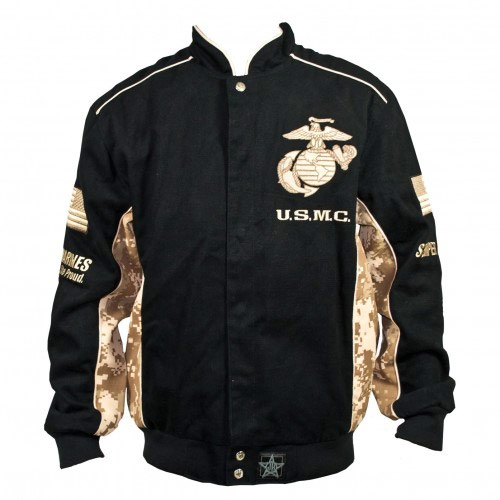 Today I stopped at Woodman's Grocery Store, here in Rockford, IL, to restock the pantry shelves. I had just finished checking out and was heading towards the door when I noticed a gentleman wearing a Marine Corps jacket. With my ice cream melting, I waited for him to finish his own check out and gave him my standard "Semper Fi Marine". I asked when he was in and if he got his jacket at Sgt Grits and he gave me dates in the late '90s/early 2000s (my memory sucks), then said he did get the jacket at Sgt Grits. This is the jacket he had on. It's pretty spectacular in person.

Fifty years ago, on or about April 18th, Bravo Battery 3rd LAAM Bn, MCAS Cherry Point NC loaded our entire Battery including all gear and personnel on C-130s bound for Vieques Island Puerto Rico for a two week firing exercise. My first time in the Caribbean and I loved it. We were fortunate enough to get overnight liberty in San Juan the next weekend and enjoyed that immensely. Had my first glass of fresh squeezed orange juice and it ruined me for life for anything less. We no sooner returned from liberty on Sunday afternoon than the word was passed that a crisis had broken out on The Dominican Republic. Of course the rumors flew fast and furious among enlisted personnel that since we were so close we would be going to the D.R. to help manage the situation. NOT In retrospect it didn't make any sense because they needed grunts not a bunch of HAWK Marines stumbling around trying to figure out what they should be doing. A bunch of disappointed Marines returned to Cherry Point that next weekend on C-130s leaving our equipment for Charlie Battery to use for their two week FireEx. Good times.

In the 4-15 newsletter, 1st Sgt Brewer said: "There are about a dozen huts left just north of the parade deck, behind the reviewing stand and across the street from recruit receiving center." Actually 1st Sgt, we had a 48 year Platoon 145 reunion at MCRD San Diego in September of 2010 and there are 15 quonset huts remaining. In neglected condition (inside) they are used for storage and are directly across the street south of receiving. The reviewing stand is quite a bit west (a little nw) of there in the middle of the south side of the Grinder across from the big flag pole. Pictures on request.

Get this squared away jacket at: