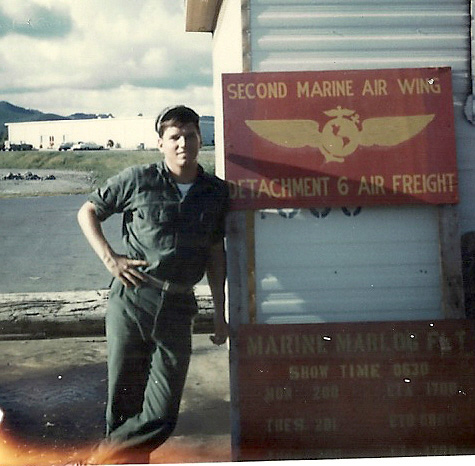 When it came to assignments in the Corps I never caught much of a break. Out of boot camp I got Aviation Ordnance School. (not many civilian uses for that knowledge). I finished 2nd in the class but never used the skills. When I made my 1st muster with H&MS-24 at Cherry Pt., the Capt. asked if anyone could type. I meekly raised my hand and spent much of the rest of my time in the Corps as an ordnance clerk. When MAG-24 was moving to Hawaii in the Spring of ’68, I put in to join them. While waiting for orders there, I became a replacement for a Marine who’s dad was already in ‘Nam and told his son to refuse the orders. Good by Hawaii, hello Vietnam and with half the normal leave time as the orders had already been cut. When returning from ‘Nam, my buddies and I put in for every west coast duty station we knew of. They got El Toro and I went back to CP. A couple of months back and I finally got a break. I was offered a TAD assignment to NS Roosevelt Roads, Puerto Rico. This had not been considered great duty. I guess I was just the right guy, at the right time with the right group there.

Detachment 6, 2nd MAW for most of my 7 months there consisted of 7 salty short time Vietnam vet Sgts. and Cpls., a cool Gunny, and a rarely present 2nd Lt. DET 6 was a support unit for squadrons that deployed to PR for tactical training. (only 1 came down while I was there). We consisted of a motor pool with about 10 jeeps, a couple of 6×6’s, and my M-60 crane and bomb trailers, and a flight line trailer where we manifested and supported the 2 weekly round trip Mar Log flights from CP to GTMO to Rosy and back. Our duties averaged a couple of hours a day with lots of free time. I learned to sail and scuba dive as well as working on my already acquired skills in tennis, golf and basketball. We could also take the jeeps to several authorized locations on the island, but we saw that as more of a guideline than a rule. It was pretty much a paid vacation from Oct. ’69 to May ’70. Also, a lot of young ladies from the Northeast vacation there in winter and were happy to have a couple of crazy Marines with jeeps to escort them around the island. Many great times and memories. I can’t find any record of the existence of DET 6 on military sites. If anyone knows of or served in DET 6, I would love to here about it.

17 thoughts on “Smallest Units In The Marine Corps”