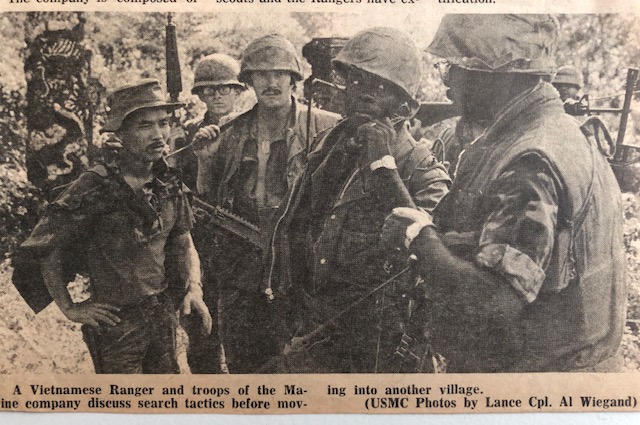 MARINE RIFLE CO MIXES IT UP WITH REDS
By Sgt. Bill Dahl

DA NANG, Vietnam (Special) – Headquartered at Red Beach, eight miles north of Da Nang, the Force Logistic Command (FLC) provides supply and maintenance support for Marine air and ground units throughout Vietnam’s northern I Corps area. Providing the main security for the sprawling headquarters complex at Camp Jay K. Books is the job of the Provisional Rifle Co. The company is composed of volunteers from units within FLC. The Marines who volunteer for the four-to-six month stint may be an office clerk or a forklift operator, but regardless of their jobs, these Leathernecks live up to the old adage that all Marines are basically riflemen. Men of the Provisional Rifle Co. conduct patrols and set up ambush sites. Often accompanying the Marines are Vietnamese scouts and Rangers. The “Kit Carson” scouts are former Viet Cong who have rallied to the government. Both the scouts and the Rangers have extensive knowledge of Viet Cong and North Vietnamese Army tactics and have proven invaluable in aiding FLC Marines on patrol. The many villages surrounding the FLC compound pose special prolems for base security. Communists try to infiltrate these villages, posing as civilians. Marines and their South Vietnamese counterparts check identification cards of villagers who do not have the proper identification.