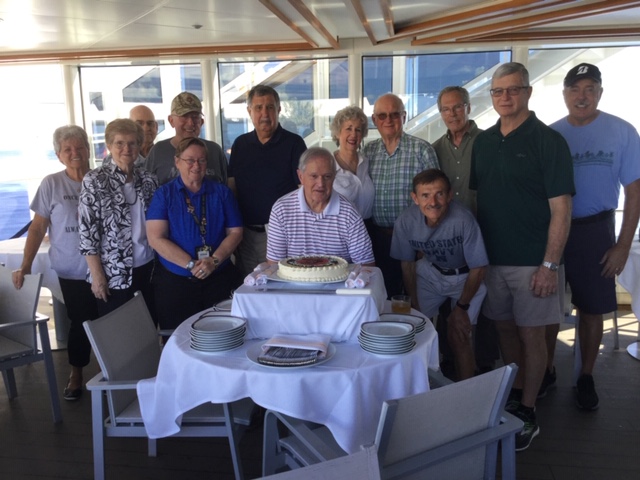 THE OLDEST YOUNGEST MARINE?
It was the height of the Cold War when I enlisted in the USMC in 1956 and went to USMCRD San Diego and then to Camp Pendleton. This was a break from my studies at UC Berkeley. Boot Camp (Platoon 3006) was a sudden cultural shock as I exchanged kindly professors for ferocious drill instructors. I have spent the rest of my life as a professor. I cherish my time in the Corps. After retiring, I started attending Marine Corps birthday celebrations.
Recently, my wife of 61 years and I went on a Holland-America repositioning cruise from Rome, Italy to Ft. Lauderdale. Since we would be at sea on November 10th I investigated and learned that the ship had made no provision for a 243rd USMC birthday party. So, I began to put one together. I ordered a cake with the EGA logo. The ship reserved a special section for us near the bar on the rear deck for November 10th.
I began to troll for Marines, wearing a Marines t-shirt and a USMC cover. Gradually, I began to meet and greet Marines. I met an ex-USN Chaplain (Rev. Dale Williams) who had served twice with us. We had a group of about 20 for the birthday celebration.
One Marine played the annual message from the Commandant. Chaplain Williams gave the invocation and then led us in singing the Marine Corps hymn. Now it came time to serve the cake. The big problem was finding out who were the oldest and youngest Marines present. The goal was to honor service in the USMC. There are few young people on a late fall cruise. I’m 81 and I did not feel that old among the passengers. There were no young Marines and a lot of us elders. We chose an imposing MSgt with the most years of service (29) as the oldest Marine. (He the second from the right.) He was 66. But, choosing the youngest Marine was a problem. So, I asked “Is anyone under 50?” No. Then, under 60? No. Finally, since the eldest was 66, I asked if anyone was under 66. There was one who was 65 plus change. (He is the one on the far right.) So, he became the recipient of the second slice of birthday cake.
The 243rd birthday party was fun. The delicious cake, the adjacent bar, and good fellowship made this celebration special.
Later, I realized that we may have set a USMC record for the oldest youngest Marine at a USMC birthday celebration. I have attached photos of the cake and a small group consisting of myself, the two honorees and friends. I regret losing the names of the two honorees and hope that a reader might identify them for the record. I’m the old guy with the USMC cover in the back row.
Do any of you know an older youngest Marine at a USMC birthday celebration?
James Freud provided the photos and made excellent suggestions for improving this letter.

6 thoughts on “The Oldest Youngest Marine?”