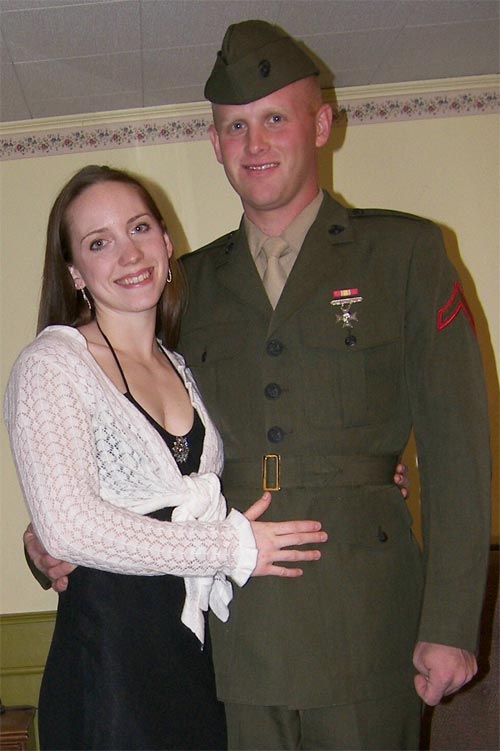 Last evening my boyfriend PFC Andrew Carlson brought me out to dinner at the Wild Horse Cafe in Beverly Ma for Valentines Day. Andrew is currently on his 10 day leave after his Parris Island graduation and will be going to North Carolina next week. We were both dressed up, he in his uniform and I in a dress. We were seated and ordered our dinners in the quiet dimly lit restaurant. I could not help but notice that there were few people dining that evening primarily because it was the night before Valentines Day. After we ordered our dessert the waitress came up and said " I just wanted to let you know that your dinner has been paid for by a gentleman who was dining here earlier. He is a former Marine and noticed you coming in and has paid for your evening together." Both Andrew and I were in disbelief. She then added, "it is an honorable thing to be in the Marines and I thank you for your service." I asked if the former Marine left his name or number and she said he didn't leave anything but just wanted to pay for our dinner. Andrew and I could not believe the generosity and unselfishness this Marine gave to us. As we sat there almost feeling guilty Andrew said "That is the first time I've experience the 'brotherhood' of the Marines The only way we can thank him is to do the same thing for a Marine someday." I nodded and we sat at our table in silence holding hands and hoping that the Marine will know how much it meant to us. I am so proud of Andrew and his decision to leave his career at 28 years old and serve his country. I am amazed at the pride and bond that Marines have for one another even if they have never met. This bond was shown to us through the thoughtfulness of the Marine who paid for our dinner. We will never forget that and I only hope and pray that he knows how grateful we are.

39 thoughts on “True Brotherhood…Thank You”