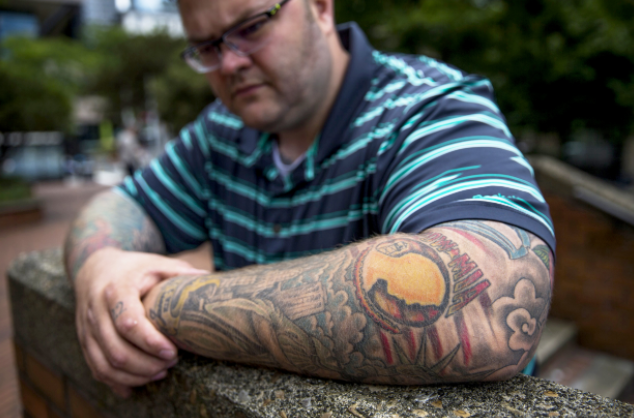 The American flag, when borne on the shoulder patch of an active-duty soldier, is supposed to be reversed, says Timothy Mangolds.

“It’s supposed to commemorate (that) you’re always running toward battle” with the flag appearing as if it’s flowing behind you, explains the 27-year old who served in the Army from 2009 to 2012.

When their lieutenant was killed in action in Kirkuk, Iraq, in 2011, Mangolds and his platoon decided to get identical American flag tattoos. But Mangolds’ tattoo, the colors of which emulate the subdued palette found on combat uniforms, is righted, with the stars on the left, as you might see on a flagpole or a lapel pin.

After some discussion, Mangolds’ platoon had agreed it would be proper to adopt the more conventional orientation. “As a sign of respect to him. Because he’s going back home,” Mangolds says.

The tattoo is a reminder of his lieutenant’s sacrifice. “This guy, had a wife, he had a kid, and they (have) to live their life without him even though he’s there in spirit,” Mangolds says. “It’s just a constant reminder to take advantage of what you have because he was young when he died. He was only 25. You know life could end at any second, at any moment.”

Many active service members and veterans boast similar artwork on their arms, legs, backs and hands. Expressing a dedication words perhaps cannot, these bodily remembrances tell tales of loss, service, patriotism and resistance. Some of these stories, like Iraq veteran and Auburn native Joshua Wheeldon’s, are novels, unfolding over vast swaths of skin.

Listening to Wheeldon, 33, describe his tattoos is like listening to a man thumb through an old photo album. Unsure of where to start, he speaks first of a tattoo that mimics one his grandfather had. “My grandpa had that eagle on his forearm. And he was in the Navy in the ’50s. Myself, I was in the Army from ’04 to ’09,” he says.

Another captures Wheeldon’s attention. “One of my friends got killed in Afghanistan so I got a yellow ribbon tattooed around my wrist with his name on it. And it’s, like, pulling a grenade pin.”

Later, he continues, “Then my great-uncle was a POW in World War II, so I have the POW and MIA flag on my arm.”

“And then my right arm: I have, like, my dad was in the Navy so I have King Neptune, and the ship my dad was on and an anchor,” Wheeldon says. He stops and summarizes the rest: “And a whole bunch of stuff like that.”

Perhaps Wheeldon’s most devastating tattoo is a simple figure on his finger. It’s a small but conspicuous 22 — the number of veterans who kill themselves every day in the United States, according to a 2012 report authored by the United States Department of Veteran Affairs. (The study has since come under question.)

“Four of my buddies killed themselves the year before last,” Wheeldon says.

Wheeldon’s tattoos help him remember their stories. “It’s a piece of you; you don’t want to forget. It’s something that will live with you forever.”

One thought on “Veterans’ tattoos symbolize loss, service and patriotism”