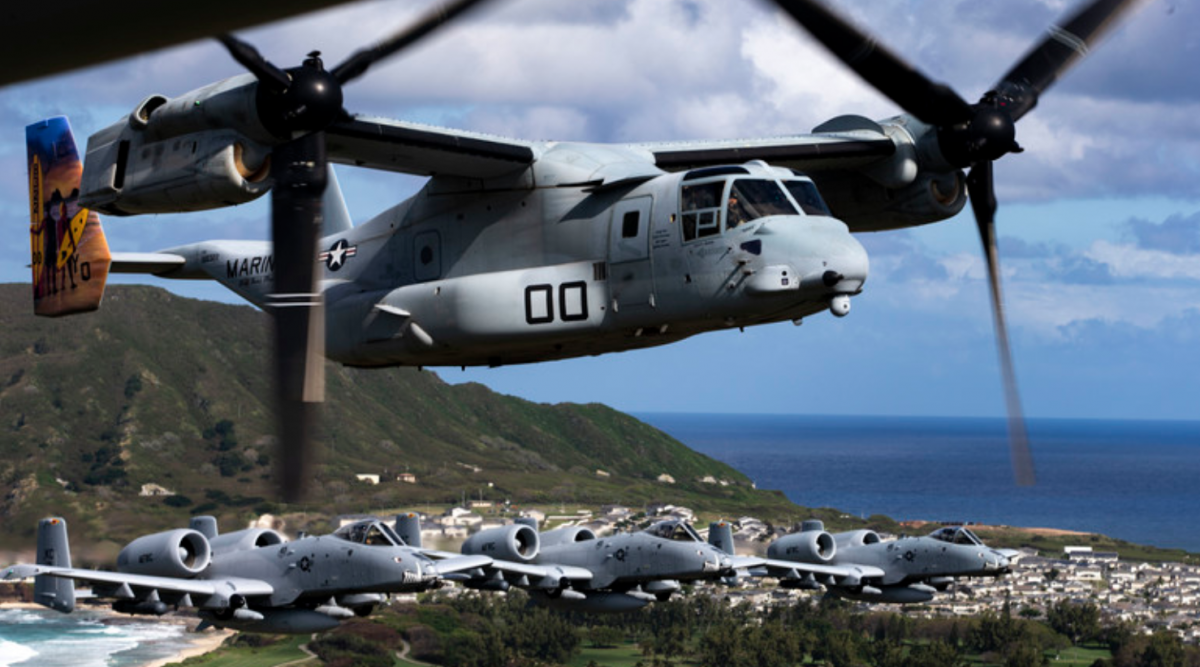 U.S. Airmen with the 442nd Fighter Wing descended on Marine Corps Base Hawaii in February to conduct various training exercises across the Hawaiian Islands.

The fighter wing, stationed out of Whiteman Air Force Base, Missouri, worked alongside III Marine Expeditionary Forces to improve combat strength and joint service effectiveness between the two branches.

“Our objective here focused on packing up and deploying to Pacific region environment,” said Chief Master Sgt. Aaron McRoberts, the deployment superintendent with the 442nd Fighter Wing. “Working alongside the Marine aircraft was a unique experience and any issue we had, they were more than happy to help.”

The fighter wing conducted various training exercises such as escorting MV-22B Osprey aircraft with Marine Medium Tiltrotor Squadron 268 and a forward arming and refueling point exercise where fuel was shared to an A-10 Thunderbolt II attack aircraft increasing flight times.

U.S. Air Force Lt. Col. Todd Riddle, the commander of the 303rd Fighter squad, 442nd Fighter Wing, said the unit has deployed multiple times to the Middle East, but the U.S. Air Force is pushing towards more training in the Pacific.

“The U.S. Air Force wants to see more Agile Combat Employment and this is the first time we were able to employ ourselves here,” he said. “Starting from nothing, we were able to work our way up to improving our joint service effectiveness with the Marines. They were able to setup various live fire exercises for us, while we provided combat search and rescues and escorts.”

Agile Combat Employment, or ACE, is the U.S. Air Force’s approach to ensure forward deployed forces are ready for a potential contingency with little notice.

Riddle said the training provided a better understanding of how U.S. Marine Corps aircraft operations are conducted and how his squadron can be implemented into the Marine Air Ground Task Force.

“Being able to work with Ospreys was a unique experience and working with U.S. Marines in general only makes us more of a lethal force in readiness. We collectively figured out a game plan to combine our assets and skills, and at the very end of the training shows how much we grew together.”