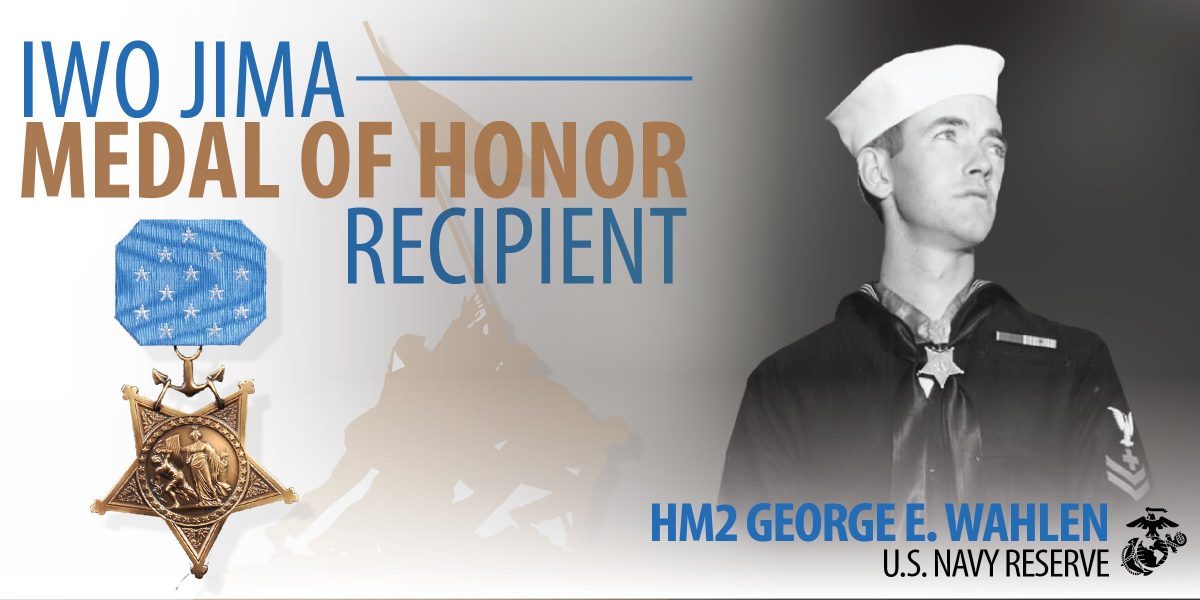 As the Marines stormed the beaches during World War II, Navy hospital corpsmen were alongside them for every battle in the Pacific. During the violent Battle of Iwo Jima, hospital corpsmen’s medical training, dedication to saving lives and fighting spirit proved to be an undeniable asset to the Marine Corps team.

Hospital Corpsman 2nd Class George E. Wahlen, then pharmacist’s mate, was among the Marines who landed at Iwo Jima in February 1945. Wahlen was born in Ogden, Utah, where he trained as an aircraft mechanic. He volunteered for the military draft hoping to continue his work on aircraft, but after he enlisted in the U.S. Navy Reserve in 1943, he was sent to Naval Hospital Corpsman School.

Wahlen’s devotion to his Marines during Iwo Jima earned him the Medal of Honor,
“For conspicuous gallantry and intrepidity at the risk of his life above and beyond the call of duty while serving with the 2d Battalion, 26th Marines, 5th Marine Division, during action against enemy Japanese forces on Iwo Jima in the Volcano group on 3 March 1945.

“Painfully wounded in the bitter action on 26 February, Wahlen remained on the battlefield, advancing well forward of the frontlines to aid a wounded marine and carrying him back to safety despite a terrific concentration of fire.

“Tireless in his ministrations, he consistently disregarded all danger to attend his fighting comrades as they fell under the devastating rain of shrapnel and bullets, and rendered prompt assistance to various elements of his combat group as required. When an adjacent platoon suffered heavy casualties, he defied the continuous pounding of heavy mortars and deadly fire of enemy rifles to care for the wounded, working rapidly in an area swept by constant fire and treating 14 casualties before returning to his own platoon.

“Wounded again on 2 March, he gallantly refused evacuation, moving out with his company the following day in a furious assault across 600 yards of open terrain and repeatedly rendering medical aid while exposed to the blasting fury of powerful Japanese guns.

“Stouthearted and indomitable, he persevered in his determined efforts as his unit waged fierce battle and, unable to walk after sustaining a third agonizing wound, resolutely crawled 50 yards to administer first aid to still another fallen fighter.

“By his dauntless fortitude and valor, Wahlen served as a constant inspiration and contributed vitally to the high morale of his company during critical phases of this strategically important engagement. His heroic spirit of self-sacrifice in the face of overwhelming enemy fire upheld the highest traditions of the U.S. Naval Service.”

Wounded from the war, Wahlen spent nine months recovering and was honorably discharged in December 1945. He enlisted in the Army in 1948 but soon after became an officer. He served in the Korean and Vietnam wars and retired from the Army in 1968 with the rank of major.

Wahlen then spent over a decade working with the U.S. Department of Veterans Affairs and retired at the age of 59. He passed away at the age of 84 and was honored with a large memorial service attended by veterans from all services.

Marines are charged with carrying forward the memories of those who fought before them. The core values of honor, courage and commitment connect today’s Marines to generations of warriors who committed themselves to the nation’s defense. We are Iwo.