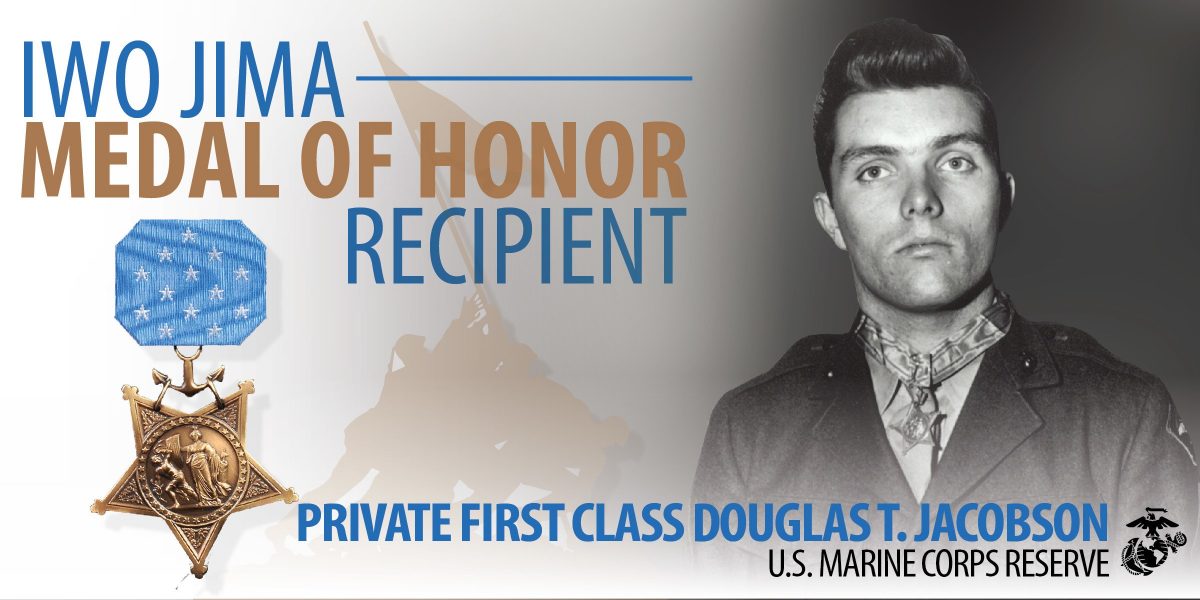 After returning home from the Battle of Iwo Jima and receiving the Medal of Honor, PFC Douglas T. Jacobson’s dedication to the Marine Corps was far from finished.

A native of Rochester, New York, Jacobson enlisted in the Marine Corps Reserve in 1943 at the young age of 17 and participated in campaigns for Tinian, Marianas Islands, and Marshall Islands before reporting to Iwo Jima.

During fierce combat, Jacobson’s famed actions including the total destruction of multiple enemy positions, earned him the Medal of Honor.
His citation reads,

“For conspicuous gallantry and intrepidity at the risk of his life above and beyond the call of duty while serving with the Third Battalion, Twenty-Third Marines, Fourth Marine Division, in combat against enemy Japanese forces during the seizure of Iwo Jima in the Volcano Islands, February 26, 1945.

“Promptly destroying a stubborn 20-mm. antiaircraft gun and its crew after assuming the duties of a bazooka man who had been killed, Private First Class Jacobson waged a relentless battle as his unit fought desperately toward the summit of Hill 382 in an effort to penetrate the heart of Japanese cross-island defenses.

“Employing his weapon with ready accuracy when his platoon was halted by overwhelming enemy fire on February 26, he first destroyed two hostile machine-gun positions, then attacked a large blockhouse, completely neutralizing the fortification before dispatching the five-man crew of a pillbox and exploding the installation with a terrific demolitions blast.

“Moving steadily forward, he wiped out an earth-covered rifle emplacement and, confronted by a cluster of similar emplacements which constituted the perimeter of enemy defenses in his assigned sector, fearlessly advanced, quickly reduced all six positions to a shambles, killed ten of the enemy and enabled our forces to occupy the strong point.

“Determined to widen the breach thus forced, he volunteered his services to an adjacent assault company, neutralized a pillbox holding up its advance, opened fire on a Japanese tank pouring a steady stream of bullets on one of our supporting tanks and smashed the enemy tank’s gun turret in a brief but furious action culminating in a single-handed assault against still another blockhouse and the subsequent neutralization of its firepower.

“By his dauntless skill and valor, Private First Class Jacobson destroyed a total of sixteen enemy positions and annihilated approximately seventy-five Japanese, thereby contributing essentially to the success of his division’s operations against the fanatically defended outpost of the Japanese Empire. His gallant conduct in the face of tremendous odds enhanced and sustained the highest traditions of the United States Naval Service.”

For his actions on Feb. 26, 1945, Jacobson was awarded the Medal of Honor by President Harry S. Truman. He continued his devotion to duty by reenlisting in 1946 and served as a recruiting sergeant and with 1st Marine Division in Peiping and Tsingtao, China.

Jacobson served eight months in the Florida National Guard before being discharged to reenlist in the Marine Corps Reserve, which he was then ordered to active duty to attend the Officer Candidate Course at Quantico, Virginia.

Throughout his career as an officer, he served in various units as a detachment officer, guard officer, range officer, supply officer, as well as executive and commanding officer. Jacobson retired as a major in 1976 and lived in New Jersey to sell real estate.

Marines are charged with carrying forward the memories of those who fought before them. The core values of honor, courage and commitment connect today’s Marines to generations of warriors who committed themselves to the nation’s defense. We are Iwo.

14 thoughts on “WE ARE IWO: MEDAL OF HONOR RECIPIENT PFC DOUGLAS T. JACOBSON”