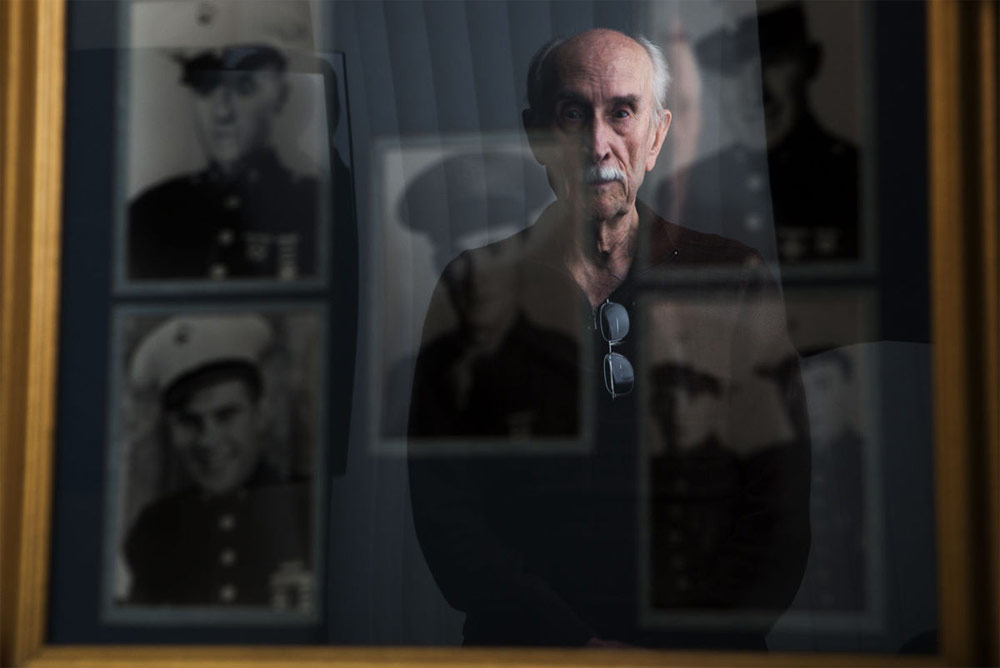 Like so many young men returning from military service in World War II, Loyd Brandt just tried to pick up and move on and leave memories of the war behind.

“You just started living a new life, raising a family. You were too busy to dwell on the war,” said Brandt, of Rapid City, who celebrated his 90th birthday a week ago.

But now, as Loyd and about 120 other area WWII veterans gather for a private luncheon in their honor in Rapid City today, most realize they are nearing the end of their lives, and for many it is honorable and even therapeutic to reflect upon one of the seminal periods in all their existence — the saving of an entire world.

With ease, Loyd can still recall his time as one of six South Dakota brothers to serve during the epic conflict.

Five of the brothers would experience some of the deadliest island battles of the Pacific War. Two would be wounded and one would die in the conflict.

Loyd and his twin brother Lester were just 17 when they enlisted in the Marines in 1943.

Older brother Harry was the first to join, serving with the Marines in China, helping protect an international settlement in the center of Shanghai from Japanese invaders before U.S. entry in the war.

Kenneth, Herbert, Luverne and twins Loyd and Lester would follow their brother into the same branch of service. “Harry was the one that started it,” Loyd said.

Harry left the military before the attack on Pearl Harbor propelled America into the war. He found work in a Navy ammunition depot on the East Coast.

Those remote islands and sandy atolls would all become part of Marine Corps legend, paid for and drenched in blood.

Kenneth participated in the Gilbert Islands campaigns and the invasion of Okinawa. Luverne was part of the Battle of Cape Gloucester on the island of New Britain and was wounded at Peleliu.

Loyd was part of an amphibious reconnaissance unit charged with going ashore to covertly scout landing zones for an invasion, often having to fight their way out again.

He nearly lost count of the number of islands he saw.

“If you can picture yourself in a 10-man rubber boat paddling ashore from a submarine or a destroyer with swells as high as the ceiling, and landing on rocky terrain, you can imagine how dangerous it was,” Loyd recalls. “We did this 64 times.”

Both Loyd and Herbert were part of the Invasion of Saipan, although in different units, in mid-June of 1944.

Herbert, still recovering from a shoulder wound suffered at Kwajalein in the Marshall Islands, had visited Loyd in Hawaii before the invasion.

Loyd had tried to visit Herbert on Saipan, but learned the sad news of his brother’s death, on July 4, 1944, from another member of his unit.

“I asked one of the guys in his platoon about Herb. He asked who I was. I said ‘I’m his brother, just looking for him,'” Loyd said, pausing for a moment.

“He said, I’m sorry to tell you this, but he was killed yesterday,” Loyd said, pausing again.

Loyd was one of thousands of marines and sailors who later watched as five marines and a navy corpsman raised the American flag on Mount Suribachi during the bloodiest battle in Marine Corps history, the invasion of Iwo Jima.

A photograph of the flag raising, taken by Associated Press photographer Joe Rosenthal, became one of the iconic images of the war. Three of the flag-raisers were killed soon afterwards.

During the invasion of Okinawa, Lester was critically wounded. After pulling another wounded marine out of the path of advancing U.S. tanks, Lester was hit by sniper fire, the bullet exploding his own ammunition carried in pouches. Shrapnel from the ammunition destroyed a kidney and his spleen. He was left for dead in the ankle-deep mud of the battlefield.

“He fell on the side that he was wounded. The mud sealed up his arteries and kept him from bleeding to death,” Loyd said.

Eventually Lester was found alive and evacuated to a field hospital. He would spend the next year in hospitals, facing numerous major surgeries.

Kenneth and Luverne also survived the war. Kenneth returned to the Black Hills, working as a logger and truck driver. Luverne worked as a cattle buyer in Iowa. After a long period of recovery, Lester eventually found work as a lineman for Black Hills Power and later with Rapid City Police Department.

The oldest Brandt brother, Roy, earned his own place in history as one of the carvers of Mount Rushmore National Monument.

Now, only Loyd and Lester remain from the family of 10 children — seven boys and three girls — raised near Hamill, north of Winner. Lester lives in Sacramento.

“I just talked to him the other day,” Loyd said.

Loyd also worked for Black Hills Power for a time after the war. In 1951, he and his wife Joyce and their young family moved to California, where they lived for 21 years.

The family, including son Douglas and daughter Deanna, returned to Rapid City just after the 1972 flood. Loyd became an electrician at South Dakota School of Mines & Technology. He retired in 1991.

Memories of the war would return in the form of nightmares, however. Douglas, a Vietnam veteran, talked his dad into seeing a Veterans Affairs psychiatrist.

Talking about his experiences and participating in a veterans writer’s group to document his service, has helped, even though the memories are starting to dim.

“It’s pretty tough, because that’s 70 years ago. People just don’t have that kind of a recollection. Most of the people you talk to are younger so they don’t have the same memories,” he said.

Loyd plans to attend Tuesday’s World War II Veterans luncheon, organized by Bill Casper of Rapid City to recognize the sacrifice and service of what has been called “The Greatest Generation.”

“I appreciate what Bill Casper is doing for us,” Loyd said.